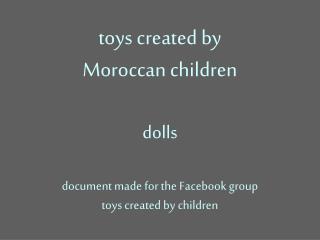 toys created by Moroccan children dolls document made for the Facebook group toys created by children. celebrating children’s creativity in their self made toys from a multicultural perspective www.sanatoyplay.org Jean-Pierre Rossie 2009.

God Created Children - . and in the process, grandchildren. to those of us who have children in our lives, whether they

Soft Baby Toys For Children - My stork babies is the best shop for small baby doll & stork baby dolls. it has a

Created by - A sponsorship that safeguards america’s children and families. sponsors and friends will be supporting a