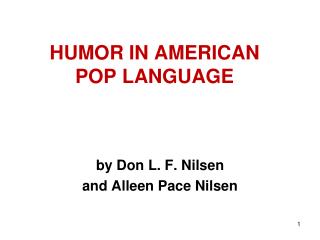 HUMOR IN AMERICAN POP LANGUAGE. by Don L. F. Nilsen and Alleen Pace Nilsen . The variety shown in these books reflects the wide range of interest in words and how we use them. . American Dialect Society’s Words of the Year Selected in January of 2013.

The Beat Generation Writers: Supplemental Background - . most educated of the beats (phd at university of sorbonne in

Negritude and the Black Arts Movement - . “sellout” by lg damas. i feel ridiculous/ in their shoes/ their dinner

Unit 7 - . teaching objectives. 1. enlarge vocabulary. 2. talk about guns and crime. 3. learn to read between the lines.

The Loudest Duck: Moving Beyond Diversity By Laura Liswood - Adapted from a workshop on 31 july 2013. presented by:

Post modernism - . a reaction to modernism. experimenting with representations of reality early part of 20 th century

REGIONAL AND SOCIAL DIALECTS - . by don l. f. nilsen and alleen pace nilsen. language vs. dialect. “a language is a