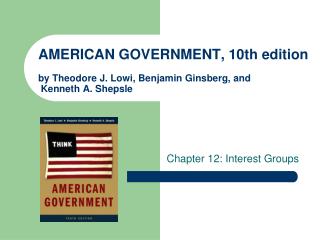 THE BUREAUCRACY - . chapter 9 o’connor and sabato american government: continuity and change. the bureaucracy. in this

Interest Groups and Lobbying - . what is an interest group?. organized group of individuals that share common goals or

Definition - . a large organization composed of appointed officials in which authority is divided among several managers