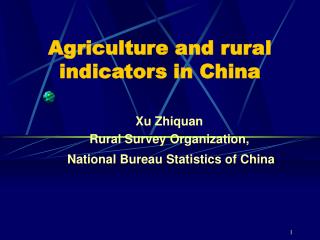 Agriculture and rural indicators in China

Agriculture and rural indicators in China

Sustainable Growth and Conservation Indicators - Preliminary draft confidential for deliberation only, not distribution.

Agriculture - . agriculture. agriculture – the purposeful tending of crops and raising of livestock in order to produce