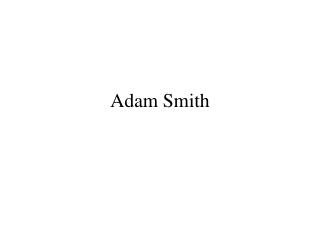 Adam Smith. Adam Smith. Adam Smith (1723 - 90) 1759 - "The Theory of Moral Sentiments" 1776 - "An Inquiry into the Nature and Causes of the Wealth of Nations” First systematic attempt to describe of the political economy of the world. Stresses the economic liberty of the individual.

Adam Smith College - . pathfinder for pecos implementation how we did it. the early pecos experience - phase i. phase 1

Adam Smith - . aim/goals: how does adam smith’s capitalism reflect the true spirit of the enlightenment? do now: should

Adam Smith - . there is a natural progression occurring in human society: hunters and gatherers agricultural based

Adam Smith Writings - . an inquiry into the nature and causes of the wealth of nations (1776) the theory of moral

Adam Smith - . chapter 4 january 29-february 2, 2007. smith compared to mercantilists. economic welfare is based on the