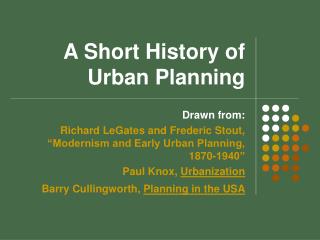 A Short History of Urban Planning

A Short History of Urban Planning

Summer School on Urban Planning for Smart Cities - . it’s up to us to stay hungry and foolish. torino citta ’

Urban Settlement - . what does urban mean?. urban more than 100 people living together in a city or town city group of

The opportunities and challenges of urban planning in practice The Case of Maseru - Urbanization?. urbanization is

history - . the early years in the 1970s, doe’s focus was on security and energy contingency planning before 1985,