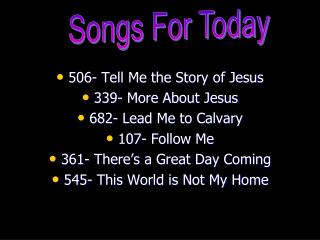 Who was Jesus? - . how would you answer this question?. historical jesus born 4-7 bce in nazareth a carpenter’s son

Mary and Joseph - (jesus mom and dad) the beginning of the story of jesus. mary and joseph. joseph. the birth of jesus

Jesus’ Parable of The Sower - . lesson 2 the sower, the seed and the hardened soil beside the road. an introduction to

Close encounters with the real Jesus - . jesus heals a leper. overview. background the story what happened? how would it

The Story of Jesus - . jesus the christ (part 3): the kingdom is near. jesus’ heart for the people: kingdom. matt.

Welcome to - . st. philip cedar. www.stphilipcedar.ca. welcome and celebrations. children’s story. i have decided to

The Story of Jesus - . as told in the synoptic gospels. terms. mystery = unknowable mystery of god’s infinite

Enthusiastic Church – In the Name of Jesus - .  in the story of the healing of the paralytic we see the followers of

Who was Jesus? - . how would you answer this question?. historical jesus born 4-7 bce in nazareth a carpenter’s son

Luke’s Story of Jesus as Counter-Narrative - . reading luke in communion. luke story of jesus was written not to