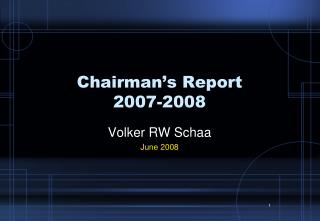 Changes in RDA - . changes in the rules for descriptive cataloging by judy knop. timeline . chapters 1-2, 4-5 reviewed

Winter 2007-2008 - . you must understand how cold weather effects your vehicle before, during, and after operation. .

THE 2007 NATIONAL INTEGRITY PERCEPTION INDEX REPORT - . by malaysian institute of integrity (iim). purpose. to present to

Director’s Report to the National Advisory Council on Drug Abuse - September 10, 2008 director’s report to the