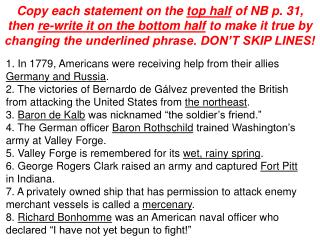 Copy each statement on the top half of NB p. 31, then re-write it on the bottom half to make it true by changing the underlined phrase. DON’T SKIP LINES!.

Captains of Industry or Robber Barons ? - . robber baron. by the 1890s the term was used to attack any businessman who

Context Analysis - . is the quick service food industry a good place to be? september 28, 2005 group a4: stephanie baron