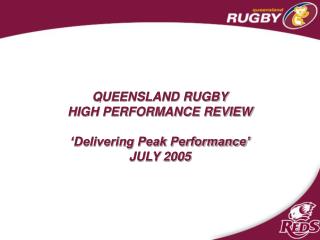 QUEENSLAND RUGBY HIGH PERFORMANCE REVIEW ‘Delivering Peak Performance’ JULY 2005 WHAT IS HPR? High Performance Rugby is the Queensland Reds Super 12/14 team and the Reds Rugby College. It is the professional rugby arm of the organisation but does not exist in isolation of Queensland Rugby.