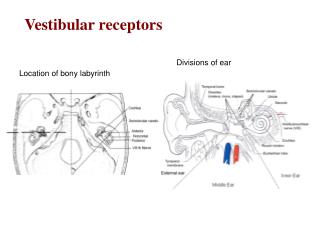 RECEPTORS - . cellular component to which the drug binds and through which initiates the

Receptors - . receptors. sensory receptors – specialized cells or cell process that monitors conditions in the body or

Vestibular System - . i. functions of the vestibular system. functions to maintain both static and dynamic (i.e.,

Vestibular System - . dr. g.r. leichnetz. what does the vestibular system do ? it informs the brain of movement of the