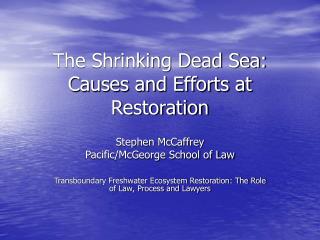 The Shrinking Dead Sea: Causes and Efforts at Restoration

The Shrinking Dead Sea: Causes and Efforts at Restoration

Stretching and Shrinking - . 2.2. objective – making similar figures. guiding question - how does doubling the

Is email dead? - . communicating with prospects and supporters in the era of spam control. dr. bill pease chief

You Are A Dead Man - . abimelech was a dead man, gen. 20:3 not for stealing money. not for taking another’s integrity.

Shrinking Manhood Yes, It Can Happen To Any Man - The best way to prevent a decrease in male organ size is to learn what Shrinking the World - . as globalization increases, so does the need for countries to work together disease, terrorism