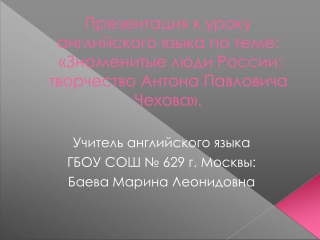 Benicia Community Orchard Our Trees &amp; Ecological Orchard May 10, 2014 - . what do we have?. cox orange pippin

The Great Kapok Tree by Lynne Cherry - . summary. in the book the great kapok tree the story was all about a kapok tree

&quot;Knowledge is of no value unless you put it into practice” Russian playwright Anton Chekhov.

Cherry Blossom - . japanese unofficial flower. in much of japan, the cherry trees (which the japanese call sakura ) come

Anton Chekhov - Chekhov is remembered as a playwright and one of the masters of the modern short story. anton chekhov.

In the Orchard - By muriel stuart . in the orchard . ashley pantoja. i thought you loved me?. ‘i thought you knew it

Anton Chekhov - . doctor. writer. innovator. the man, his world and his work. the man. anton pavlovich chekhov was born