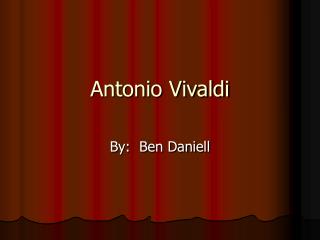 Antonio Vivaldi. By: Ben Daniell . Early, Early Childhood. Was born in Venice Italy on March 4, 1678 (And the World Rejoiced) His father was Giovanni Battista and his mother was unknown He had 4 bro’s and 4 sis’s but he and his father were the only musicians. Father and Son.

Antonio Vivaldi - . the early years. born in venice on march 4 th , 1678. oldest of 9 children. an earthquake happened on

Antonio Vivaldi 1678 –1741 Venice, Italy Nickname = The Red Priest - Because he had red hair and he was baptized at an