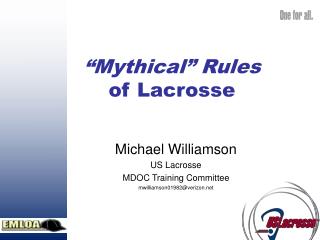 “Mythical” Rules of Lacrosse Michael Williamson US Lacrosse MDOC Training Committee mwilliamson01982@verizon.net Some lacrosse rule misinterpretations and misconceptions manage to persist through the ages and seem to have a life of their own. WHY???