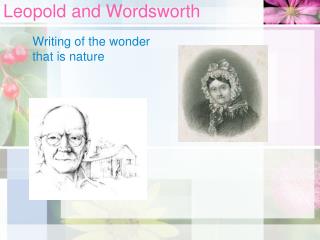 Leopold and Wordsworth Writing of the wonder that is nature To students The following is an outline and a guide to “essay 1”. Please do not directly copy. You will receive higher grades if you use your own creativity and style. Just use the following as a guide line if you need it.

Soil Science - . “land, then, is not merely soil; it is a fountain of energy flowing through a circuit of soils,

THE SOLITARY REAPER - . william wordsworth. about the poet. era – april 1770 -1850 born in cockermouth , cumberland in

Game Management - . settlers to the us. thought that conservation was not necessary thought primarily of their own

ROMANTICISM The Second Generation Poets: Byron Shelley Keats - . wordsworth and coleridge blazed the way for the

Report to Wordsworth - . boey kim cheng . by b.j. mcarthur, a.j. mcfarlane and s.h. patel. you should be here, nature