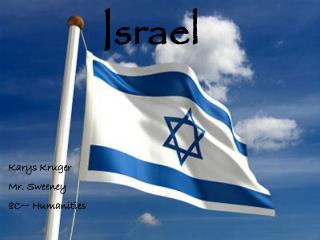 Israel Karys Kruger Mr. Sweeney 8C~ Humanities Where is Israel located? Israel is a country located on the southeastern edge of southwest Asia.

Israel - . made by igor tikhonov. form 11a. content:. g eographical location flora and fauna places of interest source of

Creation of Israel - . ancient times. jerusalem as a holy city for jews, muslims, and christians jerusalem as the capital

US &amp; Israel - . commitment to israel's security and well-being has been a cornerstone of u.s. policy in middle

Israel - . by: timmy lisk. music. in israel they listen to hebrew music . they also listen to jewish music today . they

Israel - . (fili). what taiwanese know about israel …. the typical response when i say i ’ m from israel: you don ’

There are 7 Feasts of Israel - . spring feasts 1. passover 2. feast of unleavened bread 3. feast of firstfruits 4. feast

Israel - . creation of a jewish state and a half century of turmoil. background. great britain had administered middle

Israel - . a journey through israel. caesarea. about eight or ten days later, festus returned to caesarea . the next