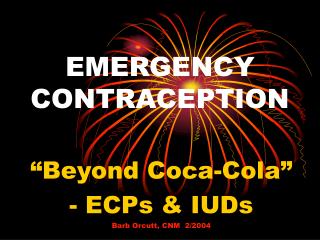 EMERGENCY CONTRACEPTION “Beyond Coca-Cola” - ECPs & IUDs Barb Orcutt, CNM 2/2004 In the US, EC could potentially prevent up to 1.7 million unintended pregnancies and 800,000 abortions each year A PILOT PROJECT - in the state of Washington a pilot project for 16 months Emergency Contraception - . morning after pills must be 17 years of age or older to purchase without a prescription 1.

Emergency Contraception - . jill zelin march 2014. why should i discuss iud if i can’t fit one?. is upa worth the price

Mechanisms of action of levonorgest rel when used for Emergency Contraception - Moscow, october, 2005. mechanisms of

Emergency Contraception and Adolescents - . objectives. by the end of this presentation, participants will be able to:

Emergency Preparedness and Bioterrorism Region Training - . presented by the minnesota homecare association staff and the