Cause in fact - PowerPoint PPT Presentation 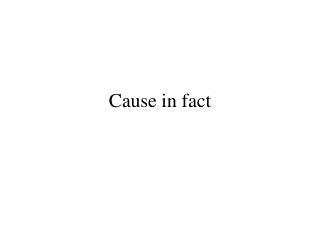 Cause in fact Ford v. Trident Fisheries (Mass. 1919) p. 299 How did P’s decedent die? Alleged negligence of trawler’s owners? lifeboat was lashed to deck; delayed rescue only one oar; had to scull Why a directed verdict for D? The court’s reasoning

Presentation Download Link - . helping you achieve your definition of success. is our pride and joy. everything you

Owner Maintenance: Things You Need to Know About Maintaining Your Airplane as an Owner-Operator - . faa safety seminar

Thank you for taking time to download and view this presentation. - Weco green lighting. brightening our future. thank

php - . what is php?. php is an acronym for &quot;php hypertext preprocessor&quot; php is a widely-used, open

KAP 140 Autopilot - . a self-study tool for pilots who fly with the bendix/king kap 140 autopilot system this

Learn how to browse, check out, and download digital titles to a personal computer using your OverDrive Digital - Welcome