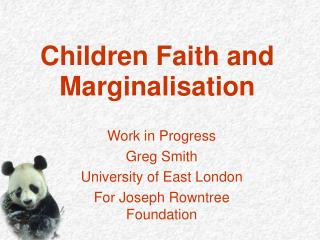 GOT FAITH? - . what is faith?. dictionary.com : confidence or trust in a person or thing :belief that is not based on

Passing on the Faith - . an orientation for parents of children in catholic schools and parish catechetical programs.

FAITH MADE PERFECT - . the development of abraham’s faith genesis 12-25. faith must grow. faith can be made perfect by

Children and Conversion - . guiding children along the journey to faith. welcome. find a friend and share the following

SALVATION BY FAITH ONLY? - . salvation by faith only?. bible chapel, statement of faith we believe that forgiveness of

Faith: Everyone’s Got It - . joe naumann. faith. faith is the confident belief or trust in the truth or trustworthiness

Faith &amp; Christianity - . thesis faith is an active trust in what you have good reason to believe is true. faith

FAITH  Walking in the supernatural - . def of faith: complete confidence or trust in someone or something faith is

HOMELESSNESS AND MARGINALISATION - . where do people on the edge fit in? bringing housing together forum 12 - 14 july

Knowing God through Feeling - What faith is not based on. the claims of religious belief and faith are not established by

The Word of God - Faith man’s reaction. the word of god. the story of salvation by faith was revealed. “…from faith