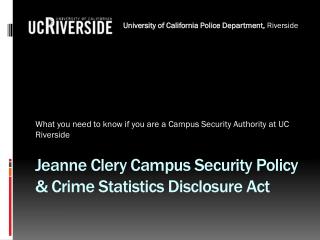 Campus Safety/Security Survey - . 2010. survey purpose. to provide an assessment of safety and security issues on the uhh Japan’s Security Policy - . japan, as a “proactive contributor to peace” , contributes even more actively in

Jeanne Clery Campus Security Policy &amp; Crime Statistics Disclosure Act - . what you need to know if you are a

Crime statistics - . crime that has been reported to the police and recorded by them. it is in the official statistics.

Jeanne Clery Campus Act Security Policy &amp; Crime Statistics Disclosure - . what you need to know if you are a