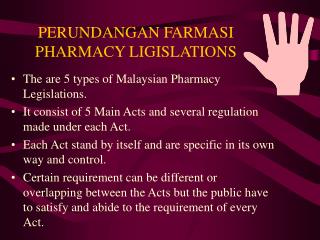 PERUNDANGAN FARMASI PHARMACY LIGISLATIONS. The are 5 types of Malaysian Pharmacy Legislations. It consist of 5 Main Acts and several regulation made under each Act. Each Act stand by itself and are specific in its own way and control.

Community Pharmacy: - . a strategic partner for pcts and liftco?. objectives. to highlight where community pharmacy might

The Scope Of Pharmacy - . the scope of pharmacy. from ancient times pharmacy is known as a branch associated with

Consultation skills for pharmacy practice Where did it start ? Why’s it important ? - . @csfpp. educational solutions

Clinical Pharmacy Services - . prepared by : nehad ahmed. what is clinical