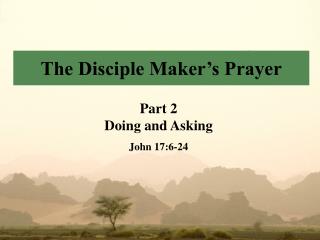 The Disciple Maker’s Prayer. Part 2 Doing and Asking John 17:6-24. Jesus’ High Priestly Prayer. Listen to this prayer Know that Jesus is at God’s right hand talking to the Father “Jesus Christ does not pray for the world today” Describe a mature disciple Why do so many fall away from faith as young adults? - Why are some non-pentecostals more

Prayer of the Holy Spirit - . “come holy spirit bring me today to be good, kind and gentle in every way. come holy

On a Wing and a Prayer - . giovanni aloi editor in chief of antennae project london editor of whitehot magazine. lecturer

Opening Prayer - . lesson 4. god created and cares for his world. creed. a statement telling what we believe or trust in.

Seven times a day I praise You, Because of Your righteous judgments - Psalm 119:164 - . evening prayer compline

Movie Maker - . by mildred serra. reflection. wishes_1.pps. what is movie maker?. windows movie maker is a fun and easy