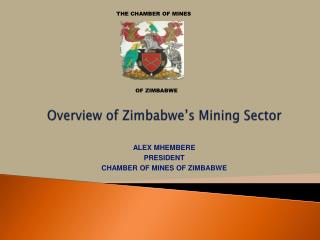 Transformation in the Mining Sector - . presentation to the ppc mineral resources – 14/09/2011. introduction. comment

GRAPH MINING a general overview of some mining techniques - . presented by rafal ladysz. preamble: from temporal to

Zimbabwe - . population in transition. presided over by president robert mugabe who was enstated in 1987 has led the

Zimbabwe - . white independence. the white minority government of rhodesia declared its independence from uk in 1965.

Zimbabwe - . welcome to the beautiful . lush forests. tall mountains. zimbabwe has it all!.

Zimbabwe - . victoria falls. the ancient city ‘great zimbabwe’. a day in the life of rural children in zimbabwe.