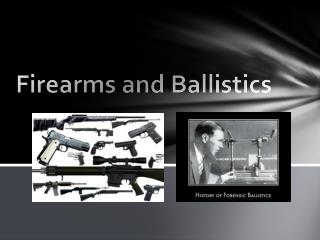 Firearms and Ballistics. History of Firearms. Mankind has been fascinated by the idea of launching a projectile at animals for thousands of years. Gunpowder was first used in China over 1000 years ago, but was primarily used in firecrackers and only rarely in military weapons.

Fwm 407: Training in Firearm and Ballistics - . scope why study firearms type and specification of firearms and

Forensic Ballistics - . ballistics is the science that deals with the flight, behavior and effect of a projectile. a

Firearms Identification - . the class characteristics obtained from an evidence bullet can narrow down the possibilities

Ballistics - . forensics chs. history. the invention of gunpowder led to the development of firearms. gunpowder first

Ballistics &amp; Firearms - . ballistics: how bullets behave after being fired from a gun *study of a projectile in

Ballistics - . what is forensic ballistics. any projectile is considered ballistic evidence. these include bullets,

Firearms (and a little Ballistics) - . once upon a time... more than 1000 years ago…. the chinese discovered black

BALLISTICS - . by, tate reed and matt lanford. what is “ballistics?”. ballistics is the study of projectile weapons

BALLISTICS and FIREARMS - . “ a well regulated militia, being necessary to the security of a free state, the right of