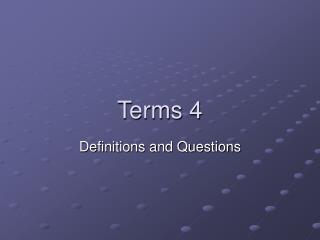 Terms 4. Definitions and Questions. Motherboard. The main board of a computer, usually containing the circuitry for the central processing unit, keyboard, and monitor and often having slots for accepting additional circuitry. Motherboard: abrev. mobo aka "system board or main board"

Arithmetic Sequences Sequence is a list of numbers typically with a pattern. 2, 4, 6, 8, … - The first term in a

Poetry terminology - . for all your poetry needs!. day 1: referencing poetry. today we are going to learn 4 terms that

IB Command Terms - . group 4. “the command terms indicate the depth of treatment required for a given assessment

Key Terms for The Alchemist - . things to keep in mind as you read. king