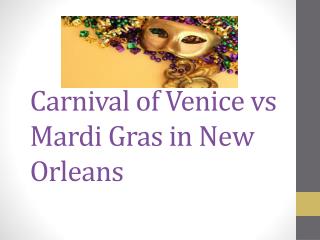 Carnival of Venice vs Mardi Gras in New Orleans

Carnival of Venice vs Mardi Gras in New Orleans. Carnival in Venice.

Carnival of Venice vs Mardi Gras in New Orleans

Venice Carnival - Highlights from the venice

The Cask of Amontillado Cultural Background of Carnival - . “…but when he ventured upon insult, i vowed revenge.”

Carnival in German speaking countries - . (or when the germans go a little crazy!!). what is carnival? . the carnival

What is a carnival? - . a carnival involves a public celebration or parade combining some elements of a circus, masks and

MASKS - . what is a mask ?. masks are all around you. each day masks are used in ways that provide the wearer with

Mardi Gras - . contest. who officially runs mardi gras in new orleans?. mardi gras is a holiday, like christmas. or

Carnival - . what is carnival ?. carnival is a festive season. carnival typically involves a public celebration or parade