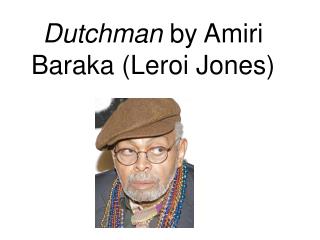 Dutchman by Amiri Baraka (Leroi Jones). Biography. Amiri Baraka was born Everett Leroi Jones in 1934 in Newark, New Jersey. He adopted the Muslim name Imamu Amear Baraka in 1967 which he then later changed to Amiri Baraka. Imamu Amiri Baraka - . by: yanice harvey. why did i choose this poet?. i chose this poet because i wanted to pick someone

The Harlem Renaissance - . harlem is vicious modernism. bangclash . vicious the way it's made, can you stand such beauty.

THE HARLEM RENAISSANCE - . harlem is vicious modernism. bangclash. vicious the way it's made, can you stand such beauty.

The Flying Dutchman - . for real?. what is the flying dutchman?. watch the

The Flying Dutchman - . this tale comes from holland . holland is a small country . it is sometimes called the

By: Abby Jones - Julia child. by: abby jones “i can still almost taste it. and thinking back on it now reminds

By Luke Jones - The lone

By Jaysin Jones - . emerald tree boa snake. there are five different groups of animals with vertebrates. these