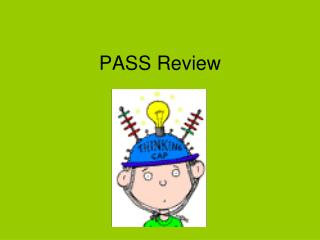 Print Pass - . print pass screen . you will print one player pass per sheet and only one pass at a time the second signed

None Shall Pass! - . mr. whitehead’s review game. category: theme (5 pts ). identify the theme in the following

Do Now - . i need a volunteer for the class job of pass-out specialist (benefit, you get a pass on do nows for the week)

TExES Review Session Principal Exam - . november 1, 2008. yea, though i walk... through the valley of the shadow of

Four in a Row - . choose one of the nine questions by clicking on it to find the answer click on the question if you