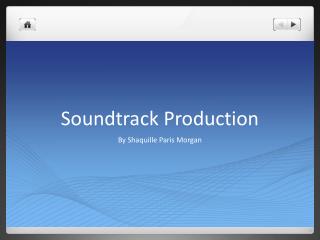 Soundtrack Production. By Shaquille Paris Morgan. Films. Films use sound to give of effects which would keep the audience entertained. There are different types of ways that they use sound within films such as: The soundtrack - . the music which accompanies a film is the “soundtrack”. music plays an important role in

The Giver Soundtrack - . by: austin pavelka fifth period. “i feel bad” by: rascal

Romeo and Juliet Soundtrack - . act i, scene i “love is a battlefield” by pat benatar romeo’s love for rosaline is

Soundtrack and Lighting - . media language. lesson outcomes. understand what work is being done by the soundtrack be

Soundtrack to Your Life - . the songs in front of the stories. ms. smith's. rockin'. jams!. kcs. 1. a song that explains

Empire the Official Movie Soundtrack - . includes all the songs from the movie. table of contents. 1. where have all the

Extra Credit Slide Soundtrack Project - . cast the major roles for a contemporary version of the film for at least 5

Creating a Soundtrack for learning - . with marc ratcliffe. overview. why music? how music affects learning where to find

Soundtrack to my Life II - . “you’ve got a friend in me”. composer: randy newman. genre. blues jazz. instruments.

Autobiography: A Soundtrack to my Life - . miss ruzanski music 12. we can climb so high i never wanna die. born to be