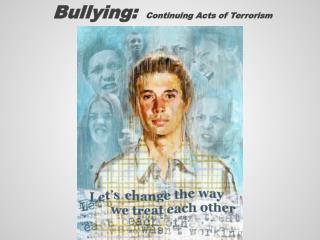 Bullying: Continuing Acts of Terrorism. 60% of middle school students say that they have been bullied while 16% of staff believe that students are bullied. 160,000 students stay home from school every day due to bullying. A bully is 6 times more likely to be incarcerated by the age of 24. Terrorism Case Study: September 11, 2001 - Main idea: terrorism threatens the safety of people all over the world . why

Bullying: What’s New and What To Do - . national crime prevention council 2006. objectives. to identify and understand

PART THREE - . the war on terror. chapter 14 . countering terrorism. learning objectives. discuss why the sas was so

The Church in Action - . lesson 6. lesson text—acts 1:14. acts 1:14 these all continued with one accord in prayer and

5th Grade NO Bullying Posters - . no bullying. srs - no more bullying. people that are bully stop. thats how it feels