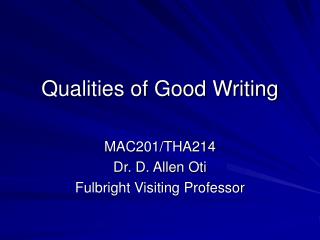 Qualities of Good Writing - . how do we know when writing is good? . good writing is worthwhile. the reader enjoys the

Qualities of Good Writing - . short paragraphs. in english class, you may have been encouraged to write long paragraphs

Qualities Of Good Learner - Everyone can sit in the classroom, take notes, and mug up the subject portion, write an exam,

Good Leadership Qualities - . by meshari alhenaki. the book ‘the flip side’ written by flip flippen considers on nine

Qualities of a Good Teacher - Mr.j stuart schultz always say there are times when the educator can overlook that what

Qualities of a Good Standard - . october 8, 2004. are your students prepared for the rigors of the 21st century?.

QUALITIES OF A GOOD TEACHER - . lesson plan. planning is very important in every field of life. teacher must plan his

Qualities of a Good Speaker - . created especially for miss lawson’s classes. stance. informal definition: how you

Qualities of Good Survey Questions - . evokes the truth. questions must be non-threatening. when a respondent is

Qualities of Good Roofing Contractor - Salazar roofing are a trusted roofing company. we offer many products and