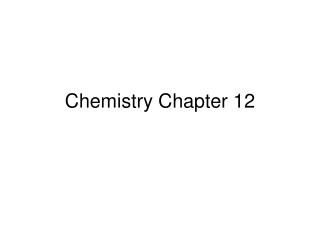 Chemistry Chapter 12. stoichiometry. that portion of chemistry dealing with numerical relationships in chemical reactions; the calculation of quantities of substances involved in chemical equations . Chemistry Chapter 12 Review - . remember to bring with you your chapter 12 foldable, periodic table and a calculator if

CLINICAL CHEMISTRY CHAPTER 12 - . lipids and lipoproteins. introduction. when was the last time you ordered a double

Chapter 12 Basics of Chemistry - . “we only become what we are by the radical and deep-seated refusal of that which

Stoichiometry Chemistry I: Chapter 12 Chemistry I HD: Chapter 9 - . save paper and ink!!! when you print out the notes on

Chemistry 11/12 - . the bridging science between biology and physics, studying matter and it ’ s various interactions