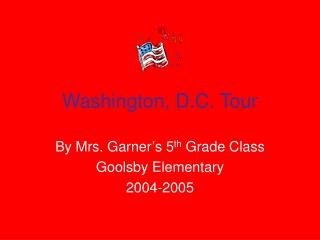 Washington, D.C. Tour. By Mrs. Garner’s 5 th Grade Class Goolsby Elementary 2004-2005. The Capitol. By Brittany Malek, and Kelsey Hazel. THE CAPITOL. There are 540 rooms and 685 windows in the Capitol, 108 of the windows are in the dome. About the Capitol building. A Green Infrastructure Tour - The Washington Metropolitan Area - - . developed under a grant from the national park

On Tour With One Direction - . this presentation will introduce you all to one direction. presented by: maddy pesce