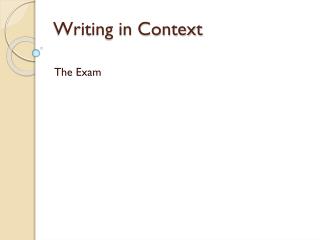 Writing in Context. The Exam. Exam specifications. Worth 1/3 of total marks Required to write an extended piece for a specified audience and purpose, exploring ideas and using detail from at least one text ( Shark Net or Enduring Love ) Experience Nonfiction Writing - . cindy matthews. why focus on non-fiction writing?. ‘with the exception of attendance,