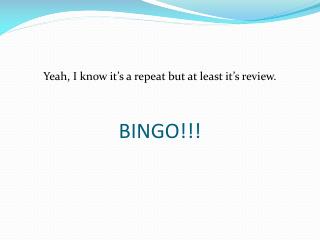 Cetacean BINGO - . call list #1. 1. this whale has one of the longest known migrations of any mammal, traveling about

BINGO! - . what historical era began in the 1300s and ended in the 1500s and is known for its exceptional creativity in

Cetacean BINGO - . call list #2. 1. these small whales can be nine feet long. they can hold their breath for 8 minutes.

Blood Bingo - . unit 5 review. questions 1-3. a bloodstain pattern created when an object moves through an existing

Bingo Math! - . balance the scales. tiffany buys 17 pumpkins and reuben buys 8. how many pumpkins do they have all

Exponent Bingo! - . fun for everyone!!. creating your board. write the following numbers in random squares of your bingo

BINGO - . the senior class will be hosting bingo at preston day! it will begin at 6:30p in the fitness center.

Bingo - . a title of the magazine and what it suggests masthead a slogan that makes a point (tagline) first thing that