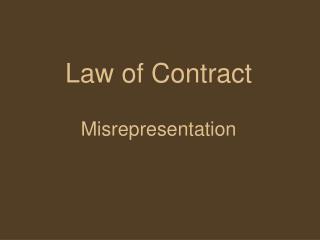 Law of Contract Misrepresentation. When negotiating a contract, the prospective parties may say many things which are designed to encourage the other party to enter into the contract. 1) Sometimes these become terms of the contract

Chapter 5 - . the time value of money. learning objectives . calculate present and future values of any set of expected

Real Estate Closing Process from Start to Finish - . contract. the contract is extremely important because whatever names

Chapter 9 Contract Formation - . introduction. promise is a declaration that something will or will not happen in the

General Conditions of the Contract for Construction - Department of public works state of connecticut table of contents.