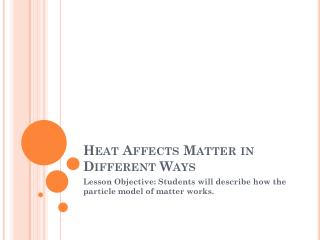 Heat Affects Matter in Different Ways. Lesson Objective: Students will describe how the particle model of matter works. First… Let’s correct. Page 189, # s 1-5. The science of heat. How can heat change the state of matter? How can it affect the particles that make up matter? Matter and Heat - . chapter 6 section 3 review. 1. what is a solid?. a. particles move fast enough to overcome some of

Different Phases of Matter - . our example, water. by michaela koleckar. phase diagram. water can be in three different

5 Ways Sugar Affects Your Brain - In addition to being detrimental to your dental health and weight, sugar is also bad

Organisms Can Interact in Different Ways - . you will learn: about different types of interactions in an ecosystem. how

Checking PNR Status in different ways - Are you eagerly waiting to visit a place through train, then probably you need to

Heat Treatment Furnaces Online in Different Models - Among some of the top manufacturers, from where you can buy the best

ORGANISMS CAN INTERACT IN DIFFERENT WAYS - . organisms interact in different ways survival of one species might depend on