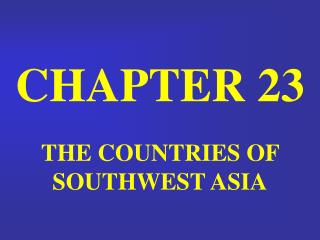 CHAPTER 23. THE COUNTRIES OF SOUTHWEST ASIA. CREATING THE MODERN MIDDLE EAST. Due to its location, The Middle East has long been a “ hot-spot ” Crossroads of Europe, Africa & Asia After being repeatedly conquered, a tangle of diverse ethnic/religious groups live here. UNITING PEOPLES.