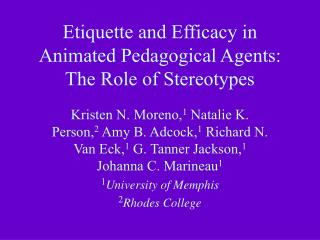 Etiquette and Efficacy in Animated Pedagogical Agents: The Role of Stereotypes Etiquette and Efficacy in Animated Pedagogical Agents: The Role of Stereotypes

Antiplatelet or Anticoagulant: Do They Have the same Efficacy? - . university of central florida deborah andrews rn, bsn.

A WORLD OF STEREOTYPES - . stereotypes. “an exaggerated image of the characteristics of a particular group. incorrect

Etiquette - . dining for success in the professional world and in life. etiquette. purpose of t his workshop: to build

Use of Stereotypes - . stereotypes are a commonly held public belief about specific social groups or types of

Business Etiquette 101 - . the written and unwritten rules of etiquette as it relates to your career and professional