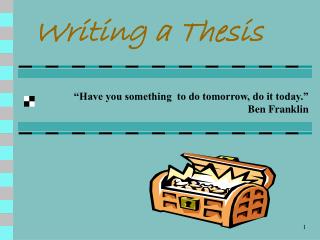 Writing a Thesis. “Have you something to do tomorrow, do it today.” Ben Franklin. Thesis defined :. The thesis sentence tells the reader what the entire essay is about, a map of your essay. . Thesis facts:. It must be the last sentence of the first paragraph.

IRB Proposals - . documents necessary to receive irb approval for your thesis. timing. when should you seek irb approval?

How to write Essays - . transitions words not to use integrating quotes thesis statements concluding…. transition

WRITING A DBQ: AP * U.S. History - . what is a dbq?. an essay question that asks you to take a position on an issue that