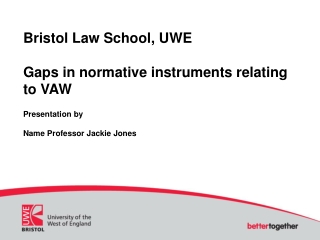 UWE Bristol Harvard referencing at UWE - Academic knowledge. develops by examining the ideas and work of others, and

UWE Bristol Academic integrity - . [these slides are available for use on their own, or to insert into

Developments in the Law Relating to Personal Injury - . william evans. introduction. when is an injury a claim? is a