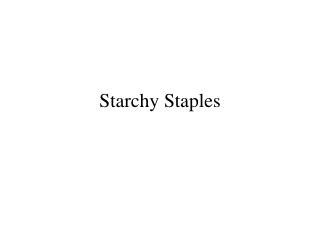 Starchy Staples. Outline. Storage organs Potato sweet potato Yam cassava Chap 14. Underground Food Storage. One successful plant strategy is to keep important parts of the plant below the ground, safe from most animals and weather, and send up disposable stems for photosynthesis.

Starchy Carbohydrate Foods - . what do starchy carbohydrate foods do for us?. the body uses them for energy they contain:

Food staples - . hfa 4c nutrition and health- mrs . m. filinov. what are staple foods?. a food staple is a food that

STAPLES, Inc. - Staples, inc. group 3. introduction. staples was founded in 1986 by thomas stemberg it is currently the

Stainless Steel Staples - Staples join or bind all kinds of materials together. however when it comes to exterior wood

Staples-Module 3 - . mary astuno. introduction to staples. staples, inc. and its subsidiaries is the world's leading