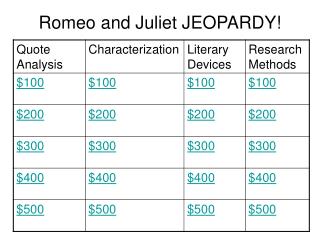 Romeo and Juliet JEOPARDY!. Quote Analysis $100. Name the function , the speaker, and the effect on the audience. Two households, both alike in dignity, In fair Verona, where we lay our scene, From ancient grudge break to new mutiny, Where civil blood makes civil hands unclean.

English I - . week of 19 to 23 may. 19 may. warm up: semicolons today’s agenda: introduction to shakespeare shakespeare

Jeopardy For Romeo and Juliet - By pawel klimek, jen lech, paul shaffer, and matthew zambelli. jeopardy for romeo and

THIS IS - Jeopardy. this is. created by: chad sims jason sells. to double jeopardy. to final jeopardy. jeopardy. green

Welcome - . to. jeopardy!. science. butterfly jeopardy. second grade. final jeopardy. round 1. round 2. what makes me

Physio Jeopardy - . your host: alex jeff gotrocks. physio jeopardy. why this for $100. we need to study this in order to