Research as a Process of Inquiry - PowerPoint PPT Presentation 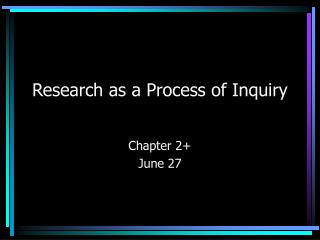 Research as a Process of Inquiry

Research as a Process of Inquiry

Selecting a Research Problem - . problem!. a question raised for inquiry, consideration or solution a complex unsettled

Research Methods - . why do we have to learn this stuff?. psychology is first and foremost a science. thus it is based in

RESEARCH METHODS AN INTRODUCTION - . presented by: bakary singhateh school of education – university of the gambia

THE ABILITY AND CONFIDENCE OF STUDENTS INVOLVED IN RESEARCH AND INQUIRY IN A PYP UNIT OF INQUIRY - . nerine chalmers.

Bridging the gap between research and teaching of science inquiry - a research approach - . birgitte bjønness and gerd

Action Research - . what is action research?. what is it good for? where does it come from? how do you do it? how is it