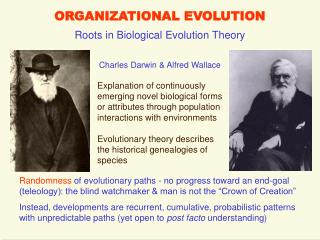 Initiating a path of change: Courage and organizational co-evolution - . mpa 8002 the structure and theory of human

The UNCDF Political and Organizational Evolution Over the Past Ten Years: - . what are the organizational perspectives

Evolution of the “ Academy-run Enterprises ” in China: An Organizational Approach - Globelics academy 2004. evolution

Organizational Wellbeing - . a journey into organizational health. journey. that has a high-level of well-being.