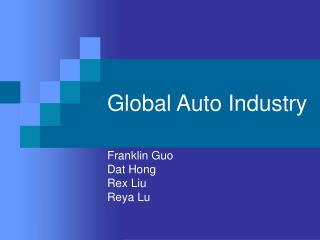 US Auto Industry Review - . ian beavis, evp global auto. from carpocalypse to the new normal. plenty of good news for the

Milestones in the Auto Industry? - At the dawn of the auto industry in late 19th century electric vehicles had a large

Utilizing you auto industry insider - The search for a new-to-you auto can seem a daunting task, but there are fantastic