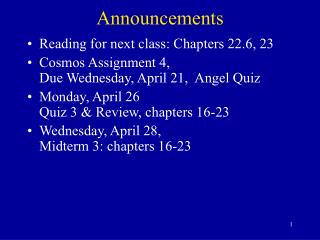 Announcements - Exam 1 will be returned at the end of class. please rework the exam, to help “solidify” your

Announcements - . assignment 4 is online for preview only; not officially handed out. assignment 2: hand out wed, due

Announcements - . we will finish linkage today and start bacterial genetics next week ( a day behind according to

Announcements - . civil and mechanical engineers: this week is for you! statics: oooh , so exciting! please pay

Announcements - . lecture powerpoint's are posted on class website as pdf files and as powerpoint slides next time: if we