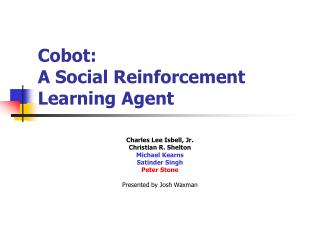 Collaborative Robot (Cobot) Market Insights 2019 - To get an idea about the report contents in pdf format, you can

Multi-agent Reinforcement Learning in a Dynamic Environment - . the research goal is to enable multiple agents to learn

Motivation Concepts Session 10 - . motivation. motivation is defined as the processes that account for an individual’s

The Market Revolution and Sectional Economies - . by clay finley. what you should learn from this powerpoint. the market