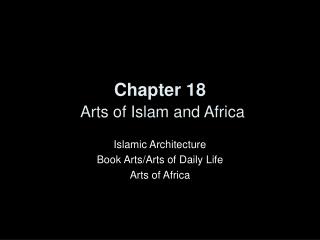 Chapter 18 Arts of Islam and Africa. Islamic Architecture Book Arts/Arts of Daily Life Arts of Africa . The Religious Culture of Islam. Islam consisted of formerly Roman lands along the south shores of the Mediterranean - North Africa, Egypt, the Near East and Mesopotamia

Africa and Islam - . rahi patel, daniel pham. key terms. islam – a religion based on the qur’an, a book believed to

Islam and Africa - . chapter 8. concept question. how did islam and animism co-exist in african societies?. concept

Africa and the Arrival of Islam - . african states 600-1450. the swahili states. founded by bantu settlers in 1 st

Africa and the Spread of Islam - . chapter 8. african societies. stateless – organized around kinship or other

Islam in Africa - . prior to islam. lack of political unity secret societies handle disputes no need to tax b/c don’t

Islam in Africa - . ch 8. i. introduction. africa is a very fragmented no concentration of power stateless societies

Islam in Africa - Objective: swbat recognize the spread of islam and its impact on world culture. set sail: 1) list the

Islam / Africa / Imperialism - . review. compared to many polytheistic religions that came before judaism and

Islam in Africa - . chapter 8. prior to islam. lack of political unity secret societies handle disputes no need to

Spread of Islam to Africa and Asia - . what is “ dar al-islam ”?. the collective regions of islam – “

Storytelling and the Arts of West Africa - . section 3. standard 7.4.5. describe the importance of written and oral

Chapter 11 Early Civilization in Africa and the Spread of Islam - . the variety of climate and geography in africa

The Influence of Islam on Africa - . islam affected many different aspects of african culture. here are 6 aspects that

Approaching Islam through the Arts - . eudaemonia conferences charlotte fowler. the purpose of the arts. education from